In terms of infrastructure, transport in Twente in the 19th century was initially only possible by cart, horse, cart, and water transport. That changed in 1865, when Born, after a long political and parliamentary struggle, got its own railway, which was part of the Almelo-Salzbergen line, Twente’s first cross-border railway, 55 km long. look back…

The municipal council, encouraged by local businessmen such as Ten Cate, Dikkers, Spanjaard and Stork, has supported the development of rail traffic in this area from the start. At the meeting of the council on December 2, 1857, the mayor and members of the council were instructed to express their support for the government for the request for concession that had been made. This was done by letter to King Willem III, but without direct result. The Railways Act of 1860 made it possible for the Van Hall-Van Heemstra cabinet to apply for a franchise as well. On April 29, 1861, Almeloir E. Doll succeeded in making such an application for the construction and operation of the Almelo-Salzbergen line. At Bourne there was still some work before the council agreed on 24 May 1861 with plans to take part in this line.

The first test run over the entire route took place on 27 September 1865. On Monday 2 October 1865 the railway was officially opened by Minister Thorbecke. The line, operated by the State Railways (SS), in addition to providing raw materials and removing products, was mainly intended for the supply of coal for the textile industry of Twente. 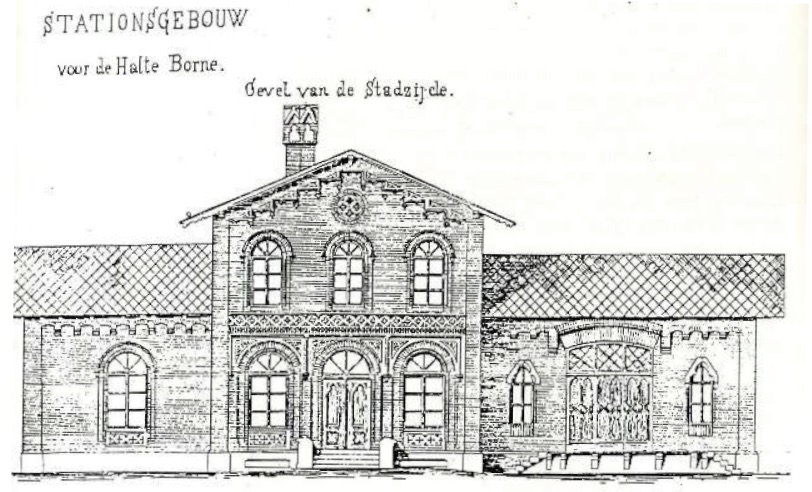 In the same year a station building was erected next to the railway line, which was unique for the Netherlands because it was built according to the German model, built of brown and red bricks with many decorations. The characteristic building consists of a raised central part with a gable and has two wings which are not of the same size. One served as an antechamber, and the other as a storeroom for goods. The stationmaster lived upstairs. The striking thing about the building is that the windows and door panels in the goods shed were made in a style related to the neo-Gothic and that other windows and doors showed characteristics of the round-arch (Romanesque) style.

Further enlargement of one wing in 1882 did not make the building any better. The other wing was furnished in 1888 as the first and second class waiting room. Later, the building was almost entirely whitewashed. To beautify the environment, a lot of green spaces have been done, such as flower beds and flower boxes. That attracted a lot of attention. The ANWB even tied an annual competition with it. Borne won a prize in 1926 and was awarded a ‘First Class Diploma with a Gold Silver Medal’ by an expert jury.

In the early 1970s, the designation of the Spanjaard complex as an archaeological monument was made in the 1975 Memorial and, in this context, to preserve the station, because the railways in the historical development of Spanjaard and the industry in Twente in general should not be underestimated. That year, a number of NS stations were placed on the memorial list, but not a single Twente station was included. In fact, Bourne was threatened with demolition. NS motivation: ‘Inefficient building with a lot of overdue maintenance. The presentation of the building is poor and unattractive at the front. Together with the attached goods shed, the whole looks like a poorly maintained barn. The building’s facades are leaking and the masonry must be replacedIn this advice it was proposed to demolish the building and put some kind of container (‘Fort cab’) with bicycle parking in its place.

The protest of the population was not massive. A spontaneously formed working group “Keep the Station” collected 2,500 signatures. In addition, the carnival association De Vrijbuiters in particular made a case for the preservation of the old station building for Bourne at the time. But above all, there was a lack of administrative decisiveness. Another unique building has been lost. Thanks to this local pressure, the Dutch Railways finally decided to build a real station building, a Pelen one, designed by architect Ir. Jim Dumas, built by contractor Holtkamp of Bornerbrook. It was officially opened on May 12, 1976. 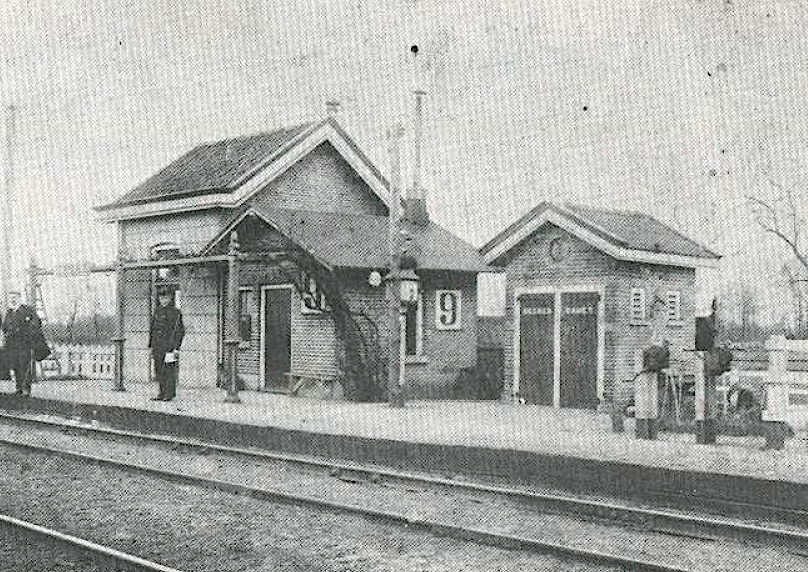 Three kilometers further on the same line, at the level crossing at Lidwinaweg, was Halte 9, a small station building in Zenderen, located between the monasteries and the Retraitehuis (Zwanenhof). This railway station was built in 1888 at the request of the people of Zinder. The station consists of a waiting room, a great room with a waiting room, and a retractable building (toilet) including a platform. The antechamber was donated by the Carmelite Fathers.

At this stopping place, the train was allowed to stop only for a short time. The difference with the station is that the stop station did not run signals and switches. A guard house was built at the station, where the track keeper lived, possibly the keeper of the annex level crossing and the keeper of the building. He checked the track regularly before and after the train passed. The blocker had to maintain communication between the guards to monitor the safe passage of trains on a free (without keys) track. This was divided into blocks, in one block at most one train could run. There is also another point guard at Zeilkerweg (No. 8). Jan Hendrik Elzink was the longest serving bus station manager. 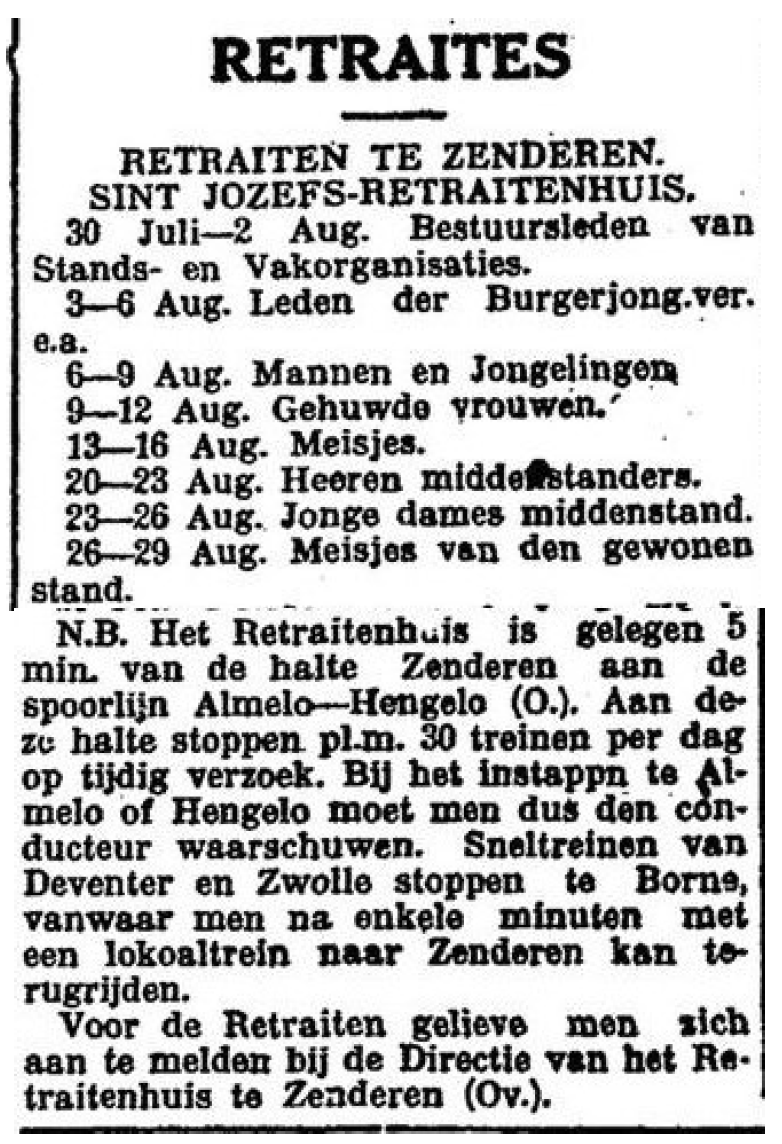 The trains first stopped at the “stopping station” on June 1, 1888, meaning; Stop when ordering at the right time. When going up in Almelo or Hengelo, one had to warn the conductor in time. Express trains continued from Deventer to Bourne. Travelers to Zenderen can take the train to Almelo here and warn the conductor that they want to get off at Zenderen. Later, there were major stops for visitors to the Retraitehuis. The station closed on May 5, 1941, because it had lost its old job. Unfortunately, this iconic building was also demolished in the late 1960’s.

In 2012, there were plans to rebuild the iconic station in the vicinity of the original site under the name t Halt 9, a reference to the station number. The new job should be educational with a high quality cultural-historical character. However, the municipal council did not agree to revise the remote zoning plan proposed by the municipal executive to make the reconstruction possible. This is confirmed by the State Council at its highest level. (HN)