A little over a year ago, John Puig told his spooky story on Nivo. At that moment he was on the threshold of his next phase (recovery) at De Stam Addiction Care, after years of drug addiction, which had caused unprecedented damage to himself and his environment. A few weeks ago, the thirty-year-old graduated from the Institute in The Hague. He earned praise straight from the heart of his fellow residents (addicts in recovery) and staff. About how much uncertainty he came with, after a period of being open to change and growth, praise was also sprinkled on his endless involvement and help to others. “The Hague has a great player,” he appeared, referring to the (voluntary) work he found at Animal Ambulance in that city. Cameras followed him, and in June he was the hero of the documentary about the 50th anniversary of the oldest animal ambulance in the Netherlands.

“My whole mindset has changed in those two years at de Stamm,” says John. He entered the institution in The Hague as a half-decomposed heap of human beings, to get his last chance at life. He was “born again,” is how he described his journey within the therapeutic community last year. “Spending two years in The Hague seems like a long and difficult programme, but in the third phase, about ten months later, you start looking for volunteer work and you get more time to find your way back into society through the aftercare process.” John says now.

Where I am now, I never expected to be able to stand there.

Volendammer has always been an animal lover. Sometimes I thought animals don’t have a doctor. Sometimes you saw animal ambulance driving near you, but you don’t pay any attention to them. Once in De Stam, I met Janneke – she had already gone through the whole process there – and she was wearing a woolen sweater from the Animal Ambulance at the time. She said it was her job. I got into a conversation and it all felt like: “That’s nice, I’ll do this one hundred percent for sure. But I had to go through the recovery stages first. When that worked and I was allowed to join as a volunteer for the first time, it was better than the image I had in my head. And still is.” I was obviously born for it, not seeing it as my job, but as a way of life.”

This was also shown during his recent graduation. “For a long time I ran away from who I was – including being gay – and drugs helped me through that. Then you’re sitting there two years later at De Stam, surrounded by people saying very special words about you, that they’re proud of you. That was so special. Around me were friends and friends from About me at that graduation.It was a very special day. My way of thinking has changed since I was accepted there, as I told other residents that afternoon. Even if you feel hopeless and see no way out, you must believe in the process you are going through. Where I am now, I have not I never expect to be able to stand there. I get to know myself, discover a different view of life and know my tragedies and my qualities. In a community like De Stam you basically do that with each other, with other clients you form a close brotherhood.”

He moved into a house with one of them on the outskirts of Rijswijk. “Beautiful and massive site, we each have our own living room. Over the years I have met many beautiful people. Two years ago I was on my addiction, now I am sober and short on time. In three months I will be out of my debt, I will have done community service at home and abroad and I will be fully immersed in life. I go to bed on time and get up early to do fun things, and live a pure life again. And the animal ambulance, that’s my passion, and I recently got certified to be able to work as a seal keeper. We were able to save one recently, and it’s very special.”

It made newspapers and news channels. As John has been followed for some time in a documentary about the animal ambulance in The Hague, which is half a century old. This documentary will be shown in June during the Utrecht Film Festival. The Hague is a worldwide leader with ambulances, its own animal hospital and boarding house. And I ride ‘ambu’ regularly with Janneke. You experience everything. For example, we were recently notified about a cat meowing for days. In retrospect, it turns out that he has been missing elsewhere in the city for weeks. That cat was so sweet and when we brought the animal to the owner, he was crying, because he thought she had already been trampled. And how the animal reacted when it saw the owner is very special. But sometimes you have to report something sad to the landlord, that’s part of it. It is very diverse. This week, together with the firefighters, we rescued a cat from a tree at a height of twelve meters. When we caught the animal, there was applause from all the people standing below and the owner cried. Once again you are in the embassy, ​​or a drug lab with drug dogs, the highway must be closed after you hit an animal.

John is the main character in the documentary. “It is unique to have the opportunity to improve animal welfare. Through a documentary like this and through the use of social media, we are showing the city and the country what we are doing.” The makers of the documentary launched a crowdfunding campaign, hoping to get donations to complete the process. “Every little bit helps,” John concludes. Attach the url to the trailer: tinyurl.com/johnbuijs 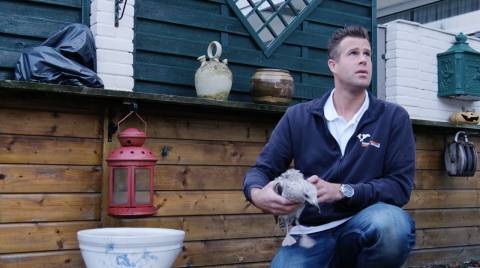