A week or so ago, Nivo posted an interview with the Bond ‘Meeuw’ family about their ‘bessie’, Teuntje Bien, who is still a Shockland-born. According to tradition, old Bessi, who was nicknamed “Teuntje van de Bel”, must not have been very kind. We added a picture of a smiling woman with a shawl and wrote that it was Teuntje Bien. We were contacted and made it right by a great-great-granddaughter, who couldn’t live with her cute (awesome) pess being swapped with someone else who wasn’t actually cute. Right about that of course, hence our apologies. The woman in the photo is not Teuntje Bien, but turns out to be Hilletje Zwarthoed.

Hilletje Zwarthoed, “Hille van de Kuiper” and Jaap Dei were photographed at their home on Giekstraat.

Who is Hilletje Zwarthoed?
Everyone has their own personal life story and that also applies to Hilletje Zwarthoed. Heltje was the daughter of Evert Zwartweed, “de Kuiper” and Geertje Twigg, and was born on 30 October 1877. She was nicknamed “Hell van de Kuiper” after her father. Evert and Gertie have 4 children. The first was a Hilletje girl but she died after more than 3 weeks. Then Heltje was born again, the article below is about it. After Hilletje gave birth to two more children, a girl and a boy, but these also died in infancy. Two weeks after his birth, the day before, his mother, Gertje Twigg, died, only 39 years old. Could there be a causal relationship between the two deaths?
A year later, Evert “de Kuiper” married Trentje Stavenwetter. She may have moved in with Evert before, partly to be able to care for his only daughter Heltje, and they eventually married each other. There were also two children born, two girls, Altje and Gerti, but their mother Trijntje Stavenuiter died at the age of only 42 more than a year after Gerti was born.
Evert Zwarthoed ‘De Kuiper’ ended up alone again, now with 3 daughters, two of whom were still very young, but he also had to do his job, in the meantime as a hunter in the Zuiderzee. The children may have good care again, because they can continue to live with their father. But 10 years later, disaster struck again. While fishing, it happened just outside the port, Evert crashed on his ship, fell overboard and sank miserably.

It seems that there were no acquaintances or relatives left who could take care of the three orphaned girls. Altje and Gertie, aged 12 and 13 respectively, were accepted into the Catholic Voorhaven Orphanage in Edam. You were allowed to stay there until you were 20 years old. Heltje was 21 when she was orphaned, but according to tradition, she also lived in the orphanage for a while.

Heltje Zwartod, married to Jaap Tole, “Jaap Di”.
A few years after being “expelled” from the Catholic orphanage in Edam, Heltje Zwarthod married Jaap Tole, “Jaap De”, on January 11, 1903. They lived in Giekstraat with their family of 7 children.
The eldest had a son, Evert Toll, nicknamed “de Kopp” or “Evert de Kopp”, after his son, “Evert de Koepper”. Evert is married to Neeltje Schilder, who is called “Neel van de Kuup” after her husband. Every ‘Kuupen’ in Volendam originates from this couple. After Evert, 7 girls were born in the family of Jaap Tol “de” and “Hell van de Kyper”, two of whom died as children.
Grietje’s daughter married Jan Kok. Jan worked in a rope factory in Edam. After the great fire in this factory, he left with his family for Leiderdorp, where he could work in a rope factory belonging to the same company.
The daughter, Geertje, married Albert de Boer. When Albert gets a government job as a ferry guard, they settle in Lage Zwaluwe.
Al Toll, “Al Day”, became the wife of Jupp Lautenschutz. They lived with their families in Driel, actually under the houses on the harbor and behind the former flower shop in Huisink.
The youngest was Huibje Tol ‘Dei’, married to Kees Veerman, son of Piet Stekeraap. Kees and Huipie also moved to Leiderdorp with their family.
Heltje Zwarthweide died on January 16, 1965, at the age of 81. As previously mentioned, she was given the name of her father, Evert Zwarthwaide “De Kuiper”. This man also has an interesting story that we want to write about next time.

With thanks to Jack Eerdhuijzen and Lida Keijzer for their collaboration. Best regards from Jan Schilder Vic, Pegasusstraat 25, 1131 NA Volendam, tel. 362216, e-mail: jan.schilder1@ziggo.nl 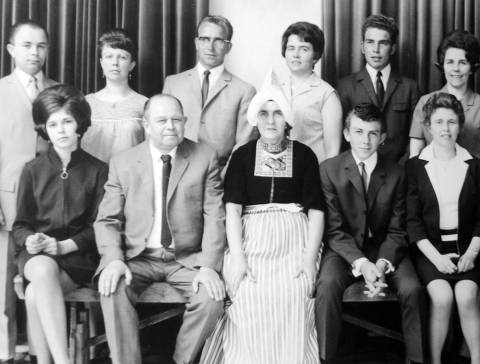 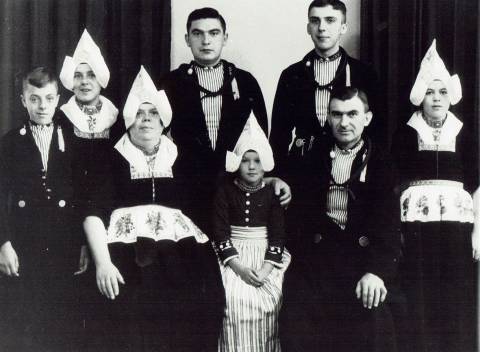 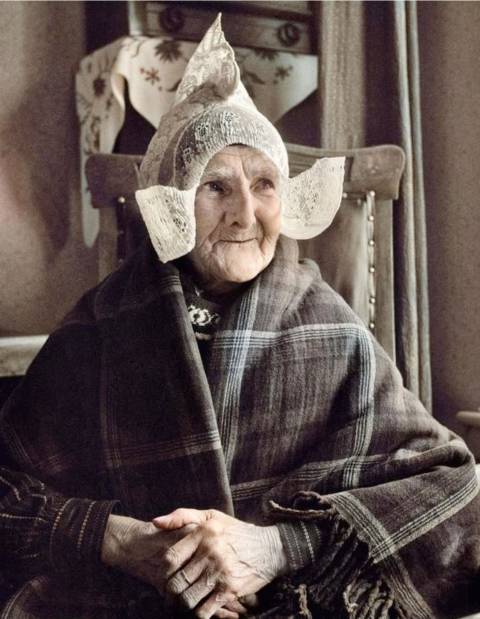 Portrait of the friendly, smiling Heltje Zwarthwaide, nicknamed “Hell van de Kuiper” after her father. This photo was part of a series taken by professional photographer Cass Orthoiz when he visited Heletje at his retirement home in Sint Nikolasov to give a photo report on it.