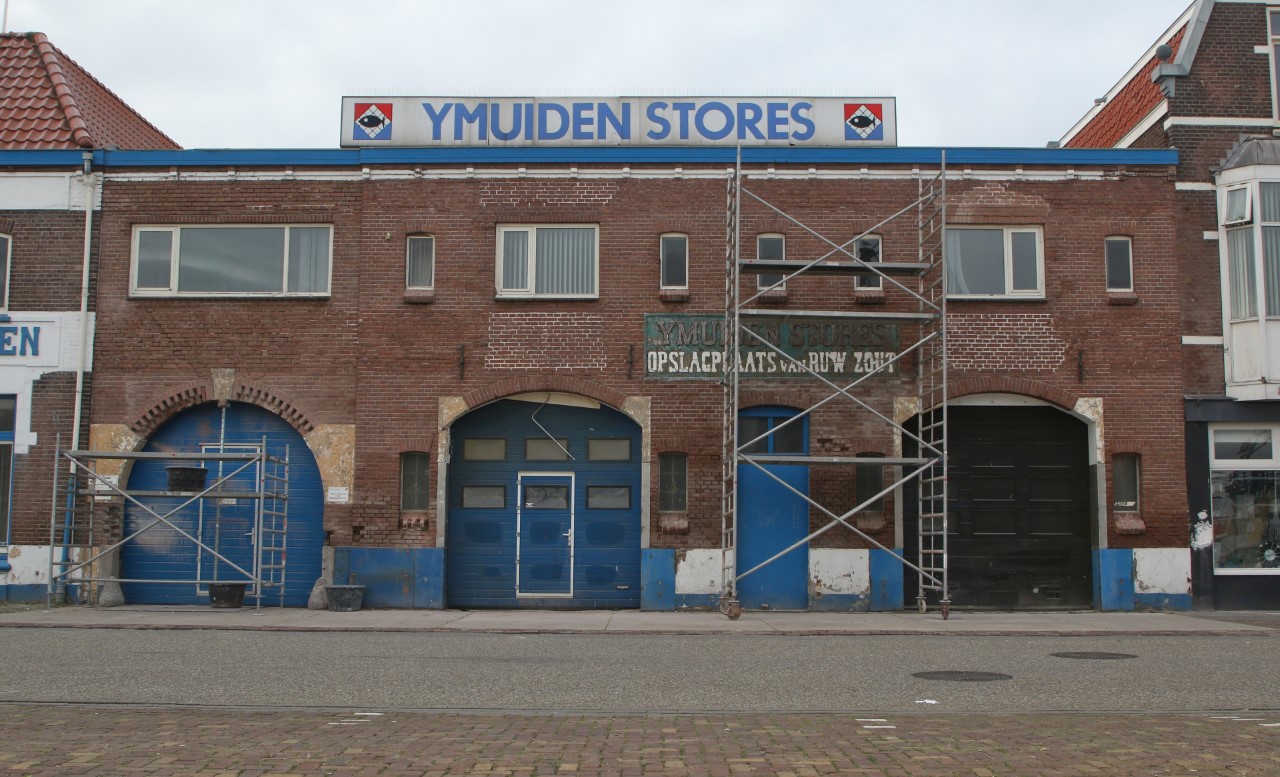 Each week in this section we think of an IJmuiden theme based on an image and in response to current events, a special event or event or simply one of the beautiful scenes that IJmuiden has to offer. In this episode we focus onRaw salt depot” in Trawlerkade

IJmuiden still holds many secrets. Sometimes you donate one, as happened recently at Trawlerkade. While working on the facade of the former IJmuiden Stores building, the text “STORAGE OF ROUW SALT” appeared under the embossed facade text “YMUIDEN STORES”. Both texts are executed on green and blue tiles between the ground floor and the first floor. For years this stone was covered in a layer of white paint and only the blue letters “YMUIDEN STORES” were visible. Great opportunity for me to dive into history!

The building was commissioned in 1909 by NV IJmuiden Stores as a warehouse to a design by architect JC Cramer and built on the south side, later the Trawlerkade on the south side of Vissershaven. IJmuiden Stores was founded on 30 June 1901 on Kanaalstraat as a trade in ‘fishery supplies and ship supplies’ by Messrs. S. A. Bakker and P. Visser. Since Vissershaven opened in 1896, the number of trawlers based in IJmuiden has only increased. The company responds to the growing need for marine equipment and grows with it. IJmuiden stores supply, among other things, “rope for herring and trawling fishing”, fishing nets, petroleum, salt and soda, cooper works, shoes, gloves and clothing, paints, varnishes and coating tools.

On the Vischstraat, which then still runs between Kanaalstraat and Frogerstraat, a working and storage facility appears in the year of its foundation, including a large oil tank. But this site soon turned out to be inconvenient. Hauling salt and barrels of petroleum from the Vischstraat up the slope near the Kamperduin café to the very low platform often leads to accidents when the cart goes crazy on the descent. For example, in 1904 a horse and cart went down in the water while carrying a load of raw salt to a ship in Vissershaven. The driver and two other passengers manage to save themselves by jumping out of the carriage just in time, but the horse drowns. Again, a wagon carrying five barrels of kerosene gets out of control on the same ramp, and the barrels hurtle down the ramp separately.

In 1909 IJmuiden Stores erected the warehouse on the south side. This undoubtedly explains the now emerging facing stone! IJmuiden stores import, among other things, “raw Portuguese salt” and trade in “fine herring fishing salt”. Due to the growth of the fishing industry and the need for more and more ship supplies, IJmuiden stores are expanding further. In 1913, to the left of the depot on the south side, it had a new depot, warehouse and oil depot, also designed by Cramer. In 1918 a branch was opened in Scheveningen.

The building on Vischstraat will house the office for some time in the future and will also be allowed for a short time to visit the Nutsspaarbank and the “Maatschappij tot Nut van het Algemeen” bookstore. In 1918 or a little later, the entire IJmuiden shops moved to the Trawlerkade. In 1921, the central bakery was established on the Vischstraat site.

From ladle to steel wire

In August 1944 a large part of the buildings on Trawlerkade were destroyed by a bombing raid. In 1946 the damaged parts were rebuilt. Even after liberation, IJmuiden Stores continued to be successful in supplying all kinds of ship supplies. On the fiftieth anniversary in 1951, a newspaper describes the range as: “From the scoop to the great sails, from the engine room parts to the heaviest steel wire and rope. And do not forget the navigational instruments, charts, flags, clocks, in short everything that can be found on board either in the galley, the engine room, on the bridge or in the residence.In addition, IJmuiden stores also carry out repairs.

Since the 1950s, IJmuiden stores have been dealing with mergers and acquisitions. Until 2020, we still know the IJmuiden stores from the many huge blocks that line the pavement between the characteristic buildings and the port, with or without cables. After that, most of the activities will move to Dordrecht and the workshop and storage space will be vacated. The sales and management team will remain in the distinctive blue and white building on the Trawlerkade.

After selling the building earlier this year, Ymuiden Store’s latest lots moved to a smaller building on Trawlerkade last month. Fortunately, the beautiful “Ymuiden Store” buildings are still there. It is a gem that usually reminds us of IJmuiden’s relentless entrepreneurship. And the discovery of such a beautiful facing stone makes the memory even more vivid!