For the 10th year in a row, mill workers at Hoeksche Waard Hoeksche Waardse Molendag, this year on October 15th from 10am to 4.30pm. Because of this luster, mill owners will be going the extra mile this year with different activities. The 10th anniversary of Regional Mill Day cannot occur in 2020 and 2021 due to the Corona measures in place at that time. Now most of the mills will be running and displays of ancient crafts and historic transportation can be seen in many places.

Lighthouses in the area
Windmills are part of the landscape on the Hoeksche Waard. In fact, without the use of Boulder’s mills, Hoeksche Waard would not have existed in its current form. About forty Boulder mills have ensured dry feet for centuries. Fortunately, you can still experience how this works at Oostmolen along the N217 and Poldersche Molen in Maasdam. The original inner mill houses there have also been preserved. In each village there was also a flour mill, where grains were ground for humans and animals. Many of the remaining flour mills in the area are still in operation and still grind grain. The new grain is delivered aboard the Mulindag in particular via a historic sailing ship through the port of Putterchok, which can also be visited that day. It is then transported by horse-drawn carriage to the windmills at Puttershoek and Maasdam.

Mill tour by historical bus and steamer
Discover Hoeksche Waard and windmills in a unique way during “Molenrondje”. sail the ship Hercules Cross the Oude Maas between Oud-Beijerland and Puttershoek and transfer to a historic regional bus for a tour of three unique windmills. There are many activities, food, drinks and music on the windmills. Would you like to visit the mills at your own pace? Then book a ticket for one trip with Hercules and follow your route by bike. The schedule can be found at www.molenshoekschewaard.nl under “News”.

Activities
The millers organize different activities especially for mill day. For example, there are many handicrafts that can be found at the windmills of Maasdam and Puttershoek, and a wide selection of artisan bread and delicacies can be found at the De Hoop windmill in Maasdam, which also celebrates its bicentennial on this day With, among other things, a mill competition and an art bus. There is something for the inner man at the various mills, including freshly baked Seuters at s-Gravendeel, waffles at Westmaas, mill pancakes at Puttershoek, handmade ice cream from Hoeksche Zuivel at De Goede Hoop mill in Mijnsheerenland and coffee/tea and fruit juices in different mills. Steam power enthusiasts can indulge in Piershil, Goidschalxoord, and Puttershoek, where steam engines are prepared to power the plug plant and threshing machine. On this day, grain is transported between different mills by horse-drawn wagon and historic truck. The mills themselves operate – when the wind is sufficient – and grind water or grain. Children can grind their own grain in the different mills.

For a complete overview of all activities, visit www.molenshoekschewaard.nl or www.facebook.com/molendaghw.

All ten factories of the Hoeksche Waard Molens Corporation participate. These are the following mills:

Eight of these mills will run on mill day. The Windlust windmills in Westmaas and ‘t Vliegend Hert in’ s-Gravendeel have been closed since the beginning of this year because damage to the metal of the rails (blades) has been found. Thus these mills are temporarily down but open to visitors. Payback plans are drawn up for each of the mills and sponsorship campaigns are conducted to fund the costs of the new blades. 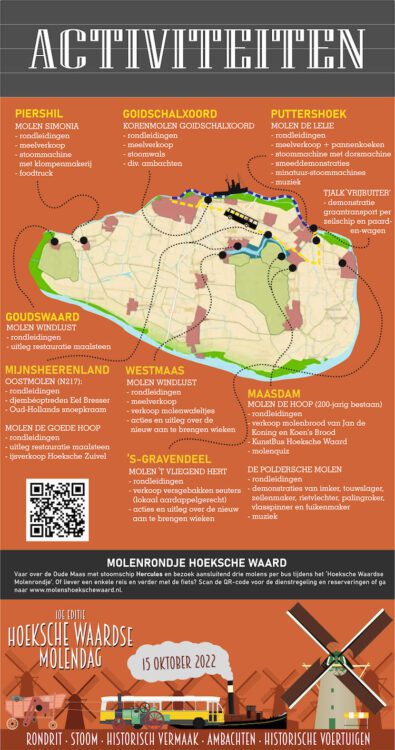