Blue at the top, white at the bottom: The two-tone Volkswagen Multivan “4.90m” invites you to travel. But instead of taking it into the mountains to see it blend into the landscape (if you can find snow and blue skies in September), we decided to use it for our Sunday trip to Kinderdijk. A small village a stone’s throw from Rotterdam is home to one of the national treasures of our northern neighbours: the old mills inscribed on the UNESCO World Heritage List. And since there is enough room for everyone in this six-person configuration with individual seating for everyone, we invited our Ukrainian guests (but without their cats) We look forward to discovering these Dutch symbols with us.

Our Multivan T7 is a plug-in hybrid drivetrain. Its eHybrid powertrain produces 218 horsepower, 150 of which are supplied by a 1.4-liter TSI four-cylinder petrol engine and 116 by an electric motor. They must, alone or together, transport a vehicle of 2.2 tons without loading. Power is transmitted to the front wheels by a six-speed DSG automatic gearbox. With the battery fully charged, we’re ready to head north, but first we need to prepare the Isofix gear for the two girls. Very simple: Click Clak.

However, restoring them together is a different matter, since the seats are very close to the body. Access to the rear seats is via electric sliding doors. To reach the third row, the second row seats fold forward and slide into a beautiful choreography. But to put it back in place, you have to pull the red or black clip, which is not always easy. The “travel bag” is very small, especially with six passengers. What’s more, the charging cable bag also takes up space. 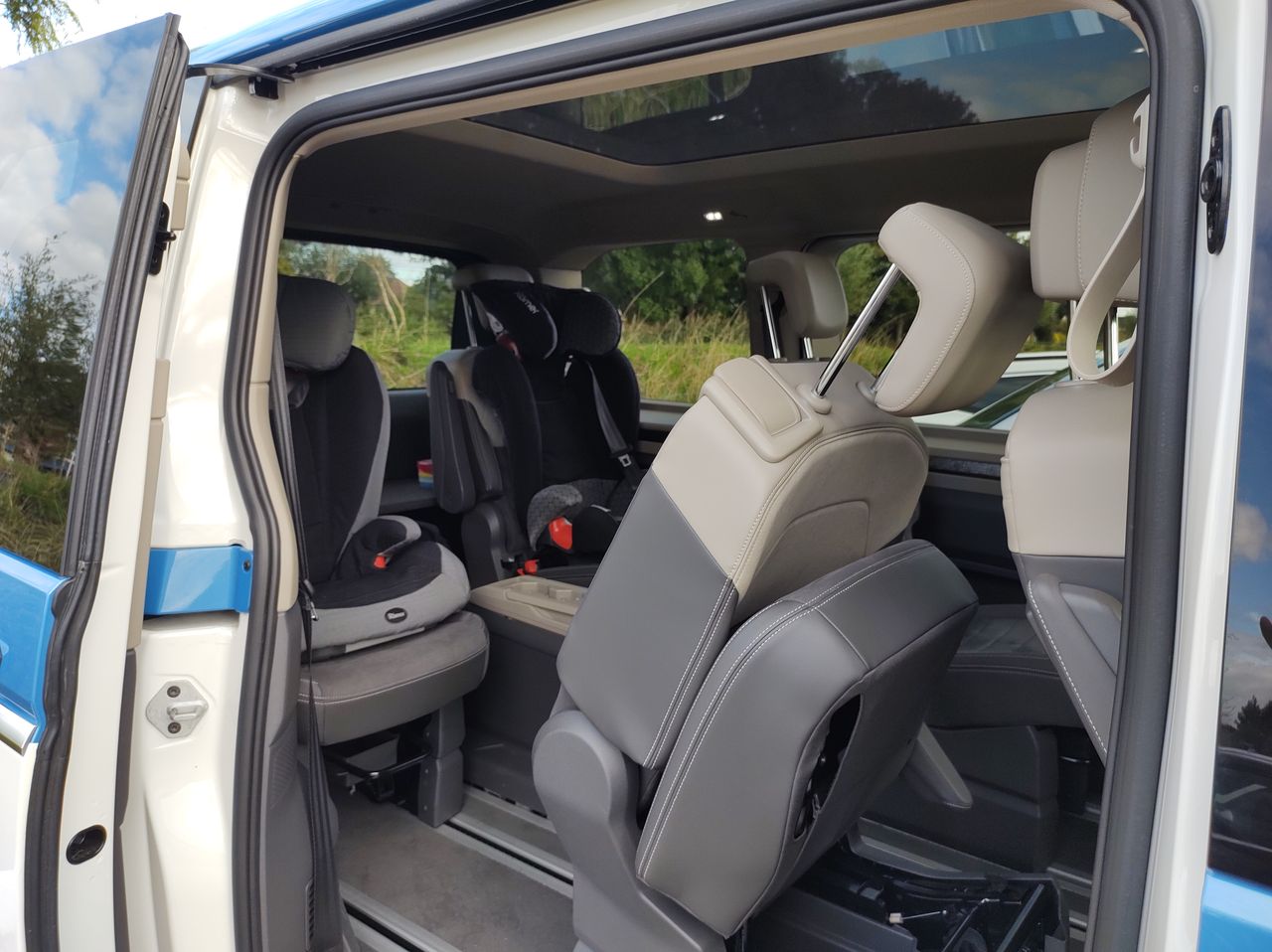 The first challenge when you get behind the wheel of a Multivan T7 for the first time is finding the gear lever. It is located to the left of the screen, next to the steering wheel. Our trip to Kinderdijk is almost 100% of the motorway, via the Brussels and Antwerp ring road. In order not to waste 10.4 kWh battery power (guaranteed range is just over 40 km), you have to access the power management menu via the “Drive mode” button next to the gear lever to save the battery and switch to hybrid and generator mode. To do this, activate hybrid driving on the touch screen.

but this is not all. Then click the gear and press the arrow to increase the required charge level (in this case 100 percent). why? On the highway, at a constant speed (and at a speed of 100 km / h around Brussels and Antwerp, and in the Netherlands during the day), fuel consumption will be lower than on the road, since you often have to change your pace. You can also improve on electricity and use it only at the end of the trip to the treadmills. Consumption report before leaving the A15 with hybrid driving and charging for approx. 180 km: 7 l / 100 km.

So the last kilometers are driven electrically. This sells smoothly, despite the Multivan’s weight. Dutch rotors require more agility than a saloon stuck lower to the floor, but the comfort of the seats prevents derogatory comments from passengers. They only react slightly when the car takes off after several bumps in the road. Volkswagen was smart enough to install speakers in the back of the car so everyone could enjoy the music (provided they agreed on the playlist).

Typical Dutch landscapes now surround us and the first windmills stand out from afar. 19 in Kinderdijk cannot be reached by car. Instead of paying for the expensive and ugly car park at the foot of the tourist center, we opted for the free car park a few hundred meters away. Small instructions for Ukrainian women: “Watch out for cyclists.” Advice that turned out to be very reasonable. As we walked along the bridge, the cyclists thought they were in the world championships and didn’t bother adjusting their speed according to the tourists. real danger! 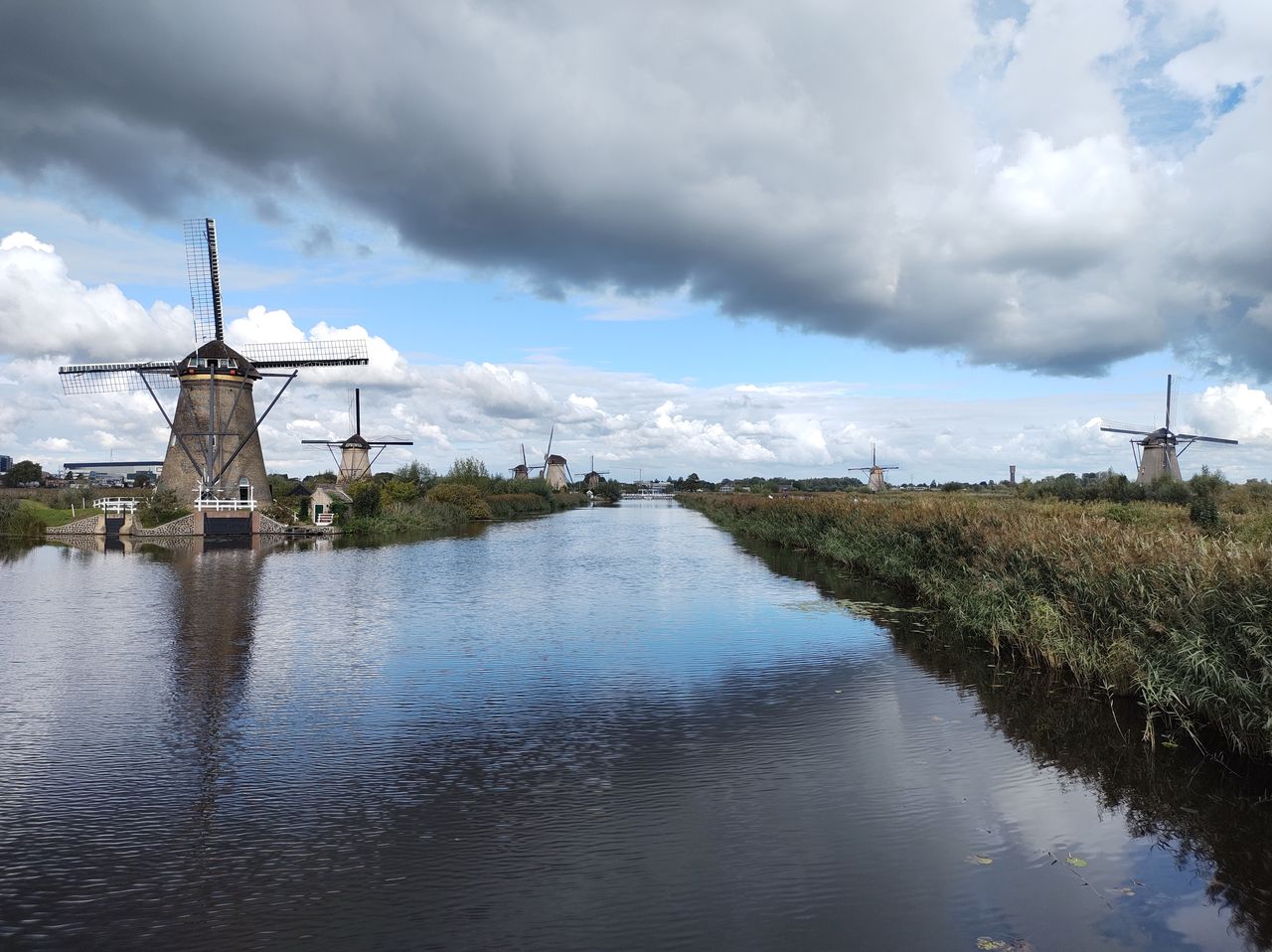 Back in Multivan, 12 hours later, we drive the VW through the little roads around Kinderdijk to continue admiring the windmills. Then we go through the port of Rotterdam to another mill we know well for a snack (But that’s another story) Before heading to the beach to drive this big bus away from the main roads. On the way, the double panoramic roof offers all passengers the opportunity to admire the blue skies, then the threatening clouds and especially the Zeeland birds..

This trip, of course, drained the battery. So we drive with a 1.4 liter engine. Even a small amount of electricity in the reserve gives an occasional boost. The beach is large, windy (great for sandy yachts) and rainy. Not at all California beaches for T1 surfers. Anyway, it could also be in T7. In addition, the boards and the small double table on the plane can be used for a picnic or a car break, which we did again after the father and daughter outing to the ice rink. 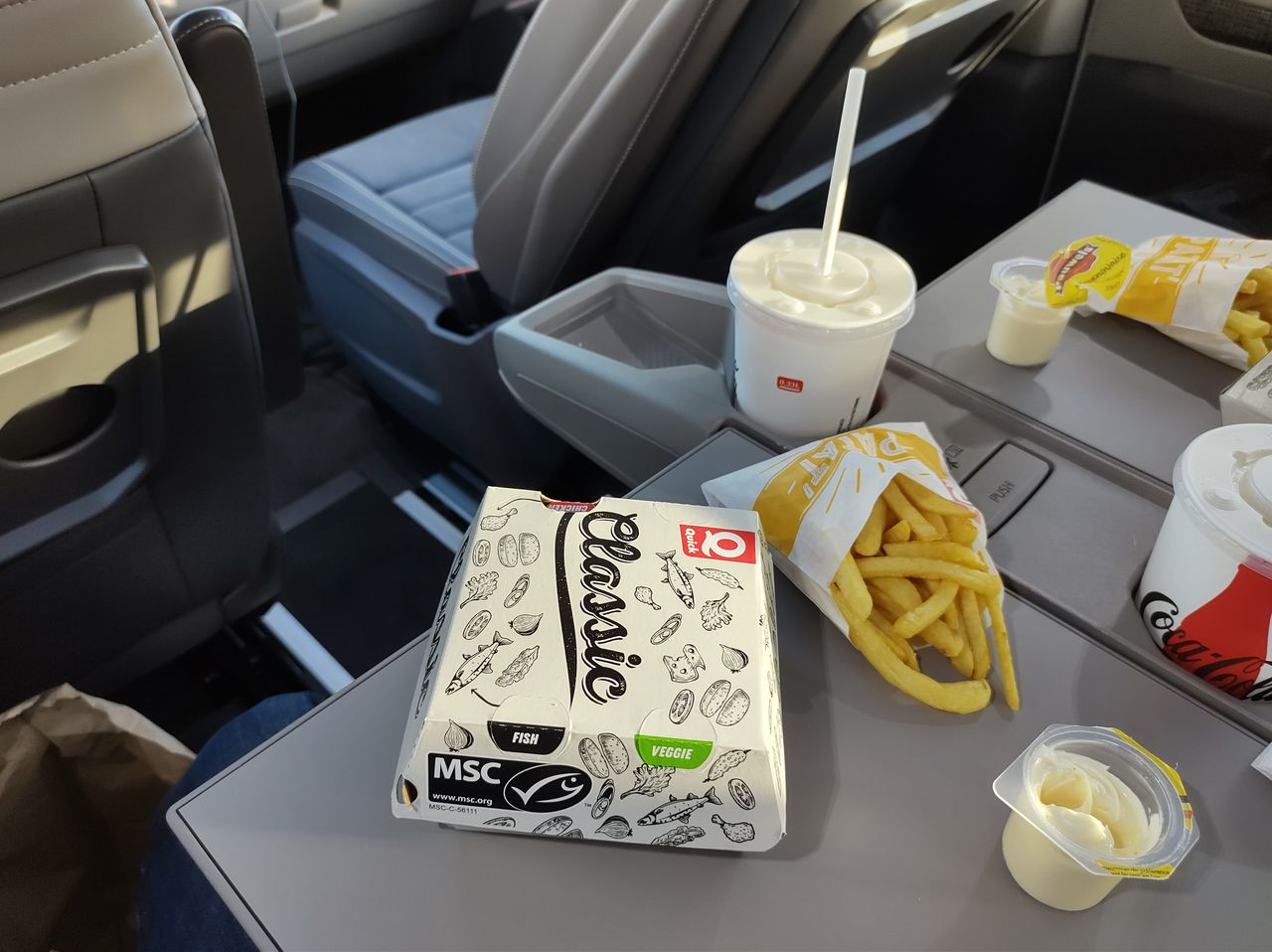 Back to our trip on Sunday. The way back on the highway is still 100 km / h, because it is only 6.30 pm (children have to go to school tomorrow). Here we ask the truck to charge the battery while driving. Again, this is a conscious choice. Since there are no sockets available in the beach parking lot (probably the only ones in the Netherlands not equipped with this), we can therefore take advantage of the constant speed of filling with electricity at a low cost of petrol.

At 420 km of the day, the balance of consumption (with EV rings) according to the on-board computer is 6.6 l / 100 km. On the way back, via the A12 and its headlights, we were also able to test the pure acceleration of the Volkswagen Multivan E Hybrid. She sprints with honor (0 to 100 km / h in 11.6 seconds) without losing balance. The torque reserve (250 Nm) and DSG steering provide enough drive not to push a little. Even when you have to pass an old Corolla on a country road, it’s driven by someone who obviously doesn’t know how to read road signs. 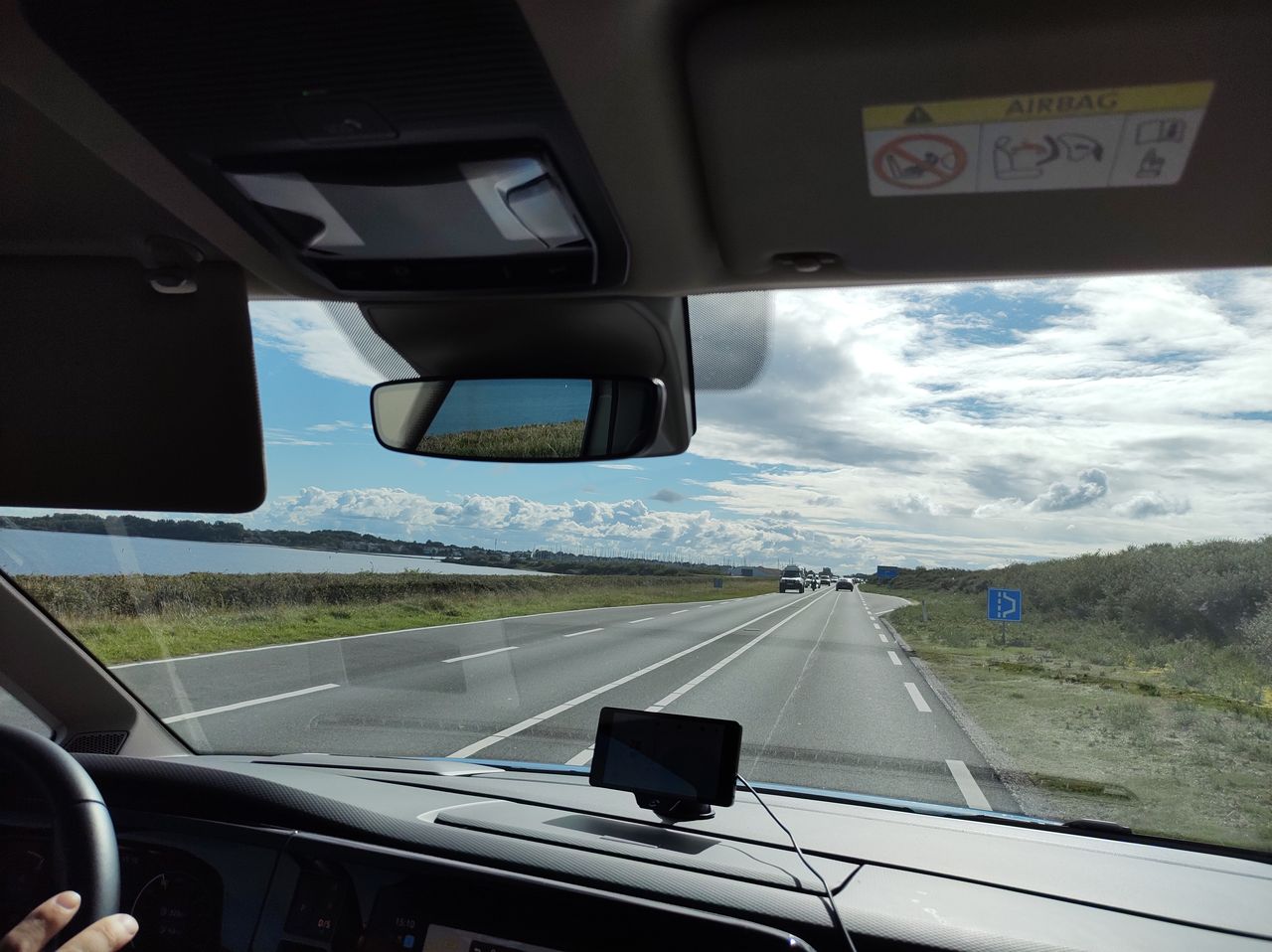 This was another nice trip to fill on a Sunday with half and half weather. The Volkswagen Multivan eHybrid proves that you can also do without diesel for such a car. Electrical support comes in handy and both motors work well with DSG assist. The ideal, of course, is to be able to connect it as much as possible, especially for short day trips. You will be well received inside, to the delight of our guests. The short version does not have much space in the trunk, but the bags can still be placed between the seats. This “large single size” is clearly intended for family use. It can perform common and extraordinary tasks by moving or removing chairs. It is also a tour bus (with roof box). But not everything is rosy either. This will drain your battery quickly, especially if you haven’t taken the time to set up power management. So you should definitely use the touch screen to force the car to switch to hybrid driving on the highway as soon as you start your journey.