The finalists for the Bird Photographer of the Year (BPOTY) 2022 competition have been announced. The images, including the black knights and the Mongolian hawk, are impressive and very diverse. It makes sense: the entries come from 115 countries. These are our five favourites.

More than 20,000 photos were submitted this year to the international competition “Bird Photographer of the Year”, abbreviated BPOTY. They come from no less than 115 different countries. Creators will compete for the first prize of £5,000 and other prizes. And of course the title of “Bird Photographer of the Year 2022”. You can sign up until the end of 2021 in different categories, such as Best Picture, Birds in Flight, Urban Birds and Bird Behaviour. Prize winners will be revealed on September 8th. About 70 to 80 photos will then be shown in an international touring exhibition.

However, some of the finalists are already known – and the pictures are beautiful. “Birds are an incredibly diverse group of animals,” said Will Nichols, director of this British competition and himself a wildlife photographer. “We’ve seen breathtaking images, from the lard to the flying body.” The goal of this competition is to highlight and celebrate the beauty of birds, according to Nichols. and the importance of protecting them (better).

Although the winner is not yet known, the organization already shares quite a few finalists. Here are our five favourites.

Photographer Erlend Haarberg (Norway) on this photo:
“It was late spring in Finnmark in 2020, and there was still a lot of snow when the first migratory birds arrived. As a result, there were only a few patches of open water on this particular river. Many waders gathered there. In search of food, while waiting for the snow to thaw in their breeding grounds.

I spent several days in my lair and could notice quite a bit of interesting behavior. It includes fierce battles between rival males, perhaps fueled by frustration due to snow. The most impressive battle was between these two black knights.†

Photographer Weng Keong Liew (Malaysia) for his photo:
“It was the beginning of the breeding season, and this black and yellow leopard was making a fuss trying to attract a mate. The courtship behavior was accompanied by a lot of loud noises and spread of wings to attract attention. In my opinion, an artist can also use these feather colors and patterns to draw a cartoon. It is stylized and in a way that does not resemble a real bird.† 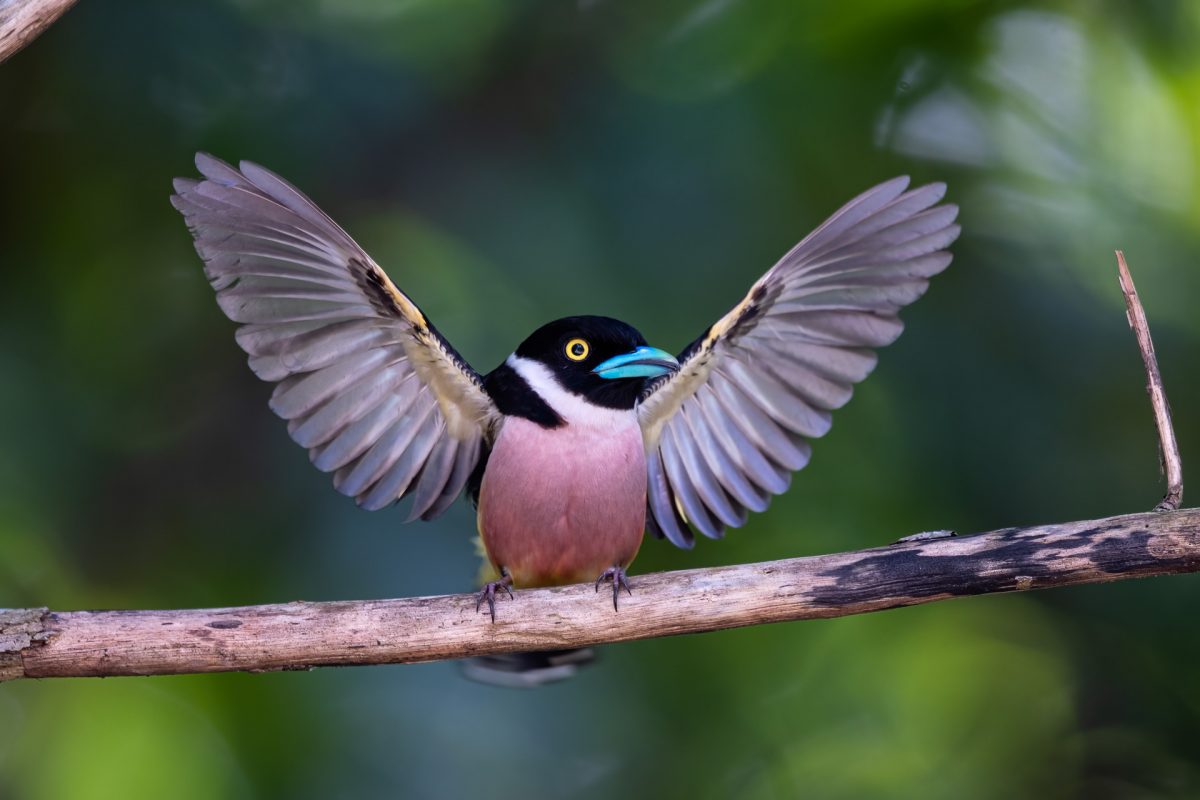 Photographer Glenn Nelson (USA) on his photo:
“I shoot great blue herons most of the year, it’s the official bird of my hometown of Seattle. I just got a new lens and wanted to try something new, so I went out of the way to observe a heron in a field. Until then, I had photographed Herons near the water only.

I was so shocked when the bird pulled up the mouse that I literally had to force myself to keep shooting. Some will find this image too terrifying to look at, and a heron’s choice of this prey will be surprising to many. But it should not be so: after all, we humans also devour other mammals and birds.” 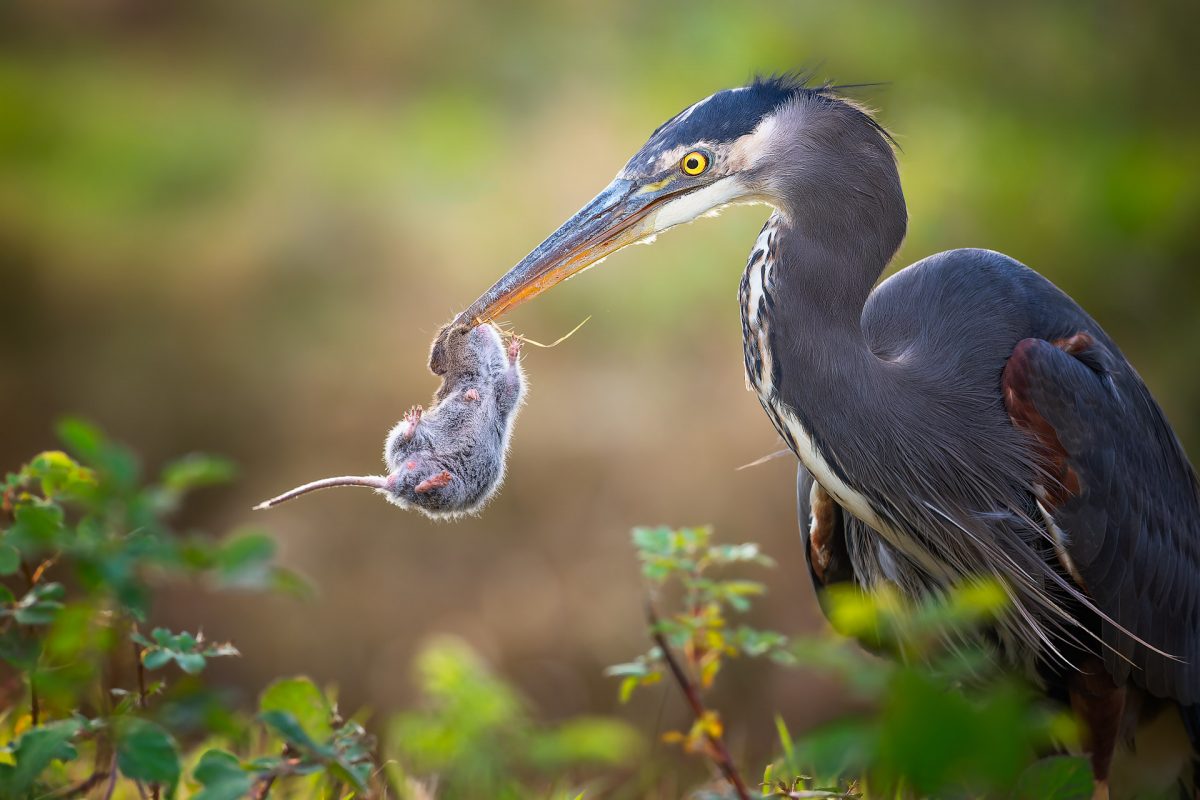 Photographer Leron Gertsman (Canada) on this photo:
“During the Covid pandemic, travel restrictions meant that I could only photograph in the immediate vicinity for extended periods of time. I decided to take this opportunity to get to know my neighborhood in Vancouver as best I could. Every morning I would go out to a local park in search of Birds and wildlife.

During the spring I managed to locate seven nests of Anna’s hummingbirds. I did not want to disturb the birds in this important and vulnerable period of their life cycle. So I kept a proper distance from the nests and limited my visits to a maximum of 15 minutes. I’ve been checking out this particular nest for a few weeks as the hummingbirds worked hard to build it and hatch their eggs. I was thrilled to see little beaks coming out of the little nest one afternoon! When their mother flew in to feed them, she captured that special moment.† 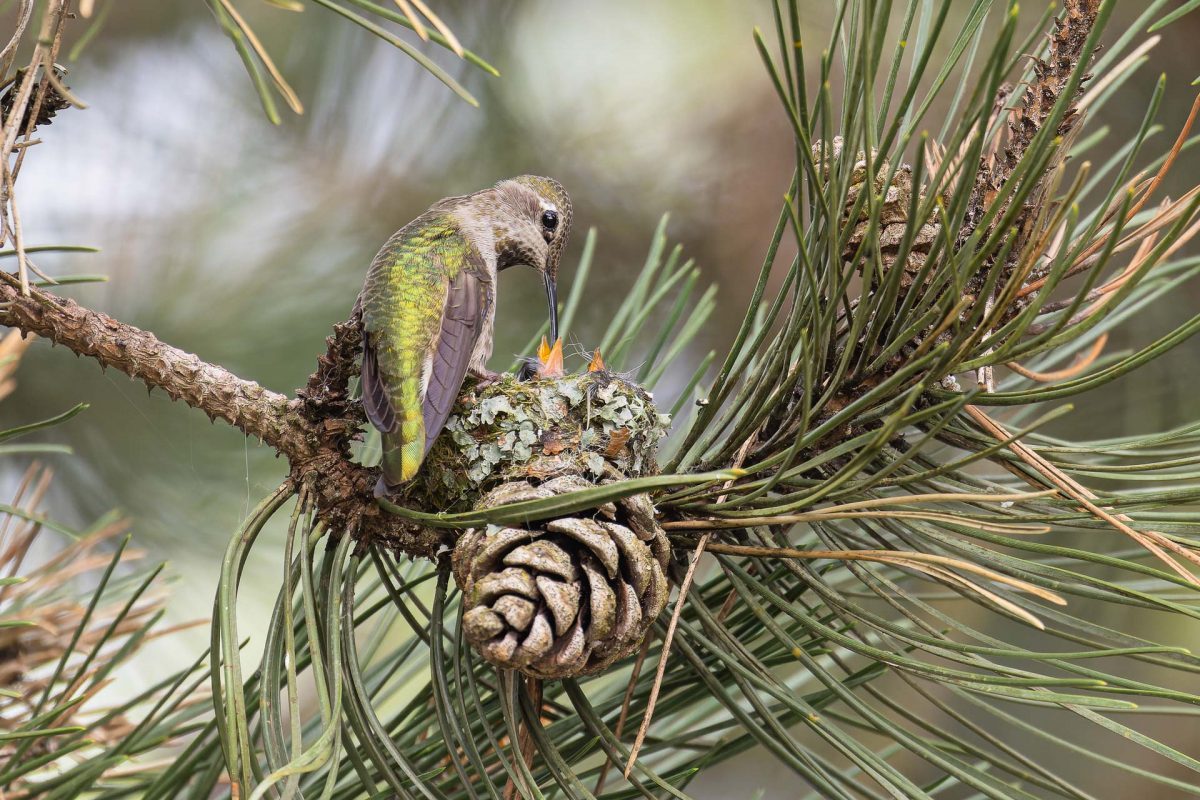 Photographer Baozhou Wang (China) about this photo:
“This photo was taken in the Mandu plains of Inner Mongolia. The Mongolian hawk and the steppe fox are both prime predators in this grassy environment, and they share the same diet: mainly small rodents. As a result, they are competitors for food, and are forced in some Sometimes they fight each other for food.

Usually such a showdown is for show, a battle of willpower that will never end in a life-and-death battle. In this confrontation, the Mongolian Falcon decides to leave its food behind and fly away.† 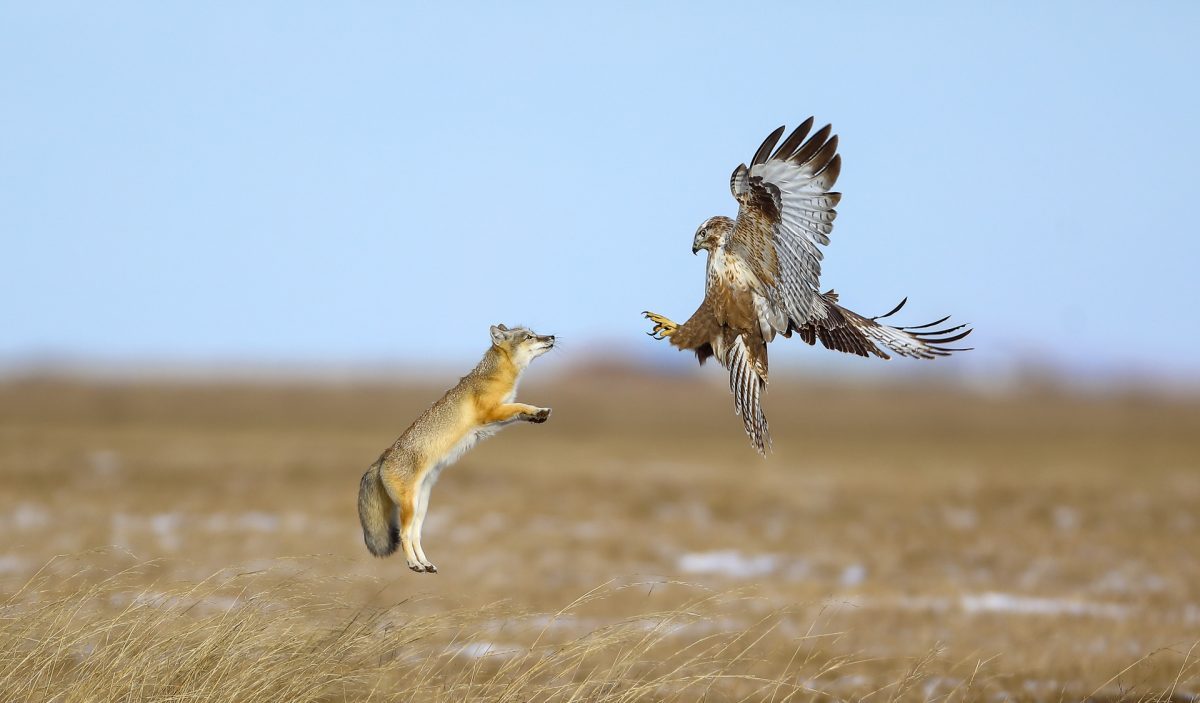