RUURLO – Last Sunday was the last gymnastics competition for the gymnasts at RGV Ruurlo. The girls in Annex E traveled to Nieuw Leusen for a final device procedure. Here all the gymnasts from Gelderland, Overijssel and Flevoland gathered to see who did the best for each apparatus, rather than everything. Led by Lisan van Haften, it was the girls’ turn in the first match. Noia Baumkamp, ​​Friedrich Klein Blomenck, Karleen Leverenc and Isolde Lewiten showed their best side. This earned Noya a beautiful bronze medal on the crossbar and Frederieke on the floor.

Isolde just missed a medal on the bridge, and is fourth by 0.15 with nr3. On the bar, Karelin and Isolde finished 10th. Carlin finished fifth and Isolde was seventh. Also on the floor, in addition to the beautiful Frederick medal, with a difference of 0.05, there was also a nice fourth place for Karelin. They were also able to keep up with the top in jumping. Isolde was the fifth and Noah the sixth. 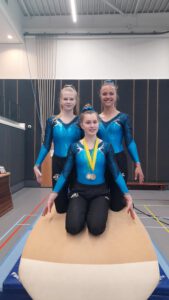 next season
Next season, Carlin and Isolde will move to another age group. Then they will end up with the little ones. In the third match, it was the turn of 3 juniors from RGV. Their last gymnastics competition is between Issa Fricks and Femke Mullenfeld. They decided to stop gymnastics after 10 years. So they were allowed to show off their skills for the last time. Despite their best efforts, their fellow club member Marit Olthoff took home the trophies. Marit got two golds. On the bridge and beam she managed to beat the competition of 24 gymnasts.

Derby at Girl U17: Ritmoulin / Luquezen vs FC Ibergen
Ritmaulen – U-17 girl players from St. Reitmoulen/Lauchoisen and FC Ibergen have been looking forward to the final game of the season for weeks……
Read more”

Atelier Birkeland Drive During Pentecost Weekend
BERKELLAND – Walk or cycle through the Achterhoek in a landscape marked by trains. The forest, the fields, the rolling terrain, punctuated by……
Read more”

NEEDE – Mills across the country opened their doors this past weekend during National Mill Weekend. This is also the case in Neede, where Bennie Mensink and colleagues have highlighted the plant in Diepenheimseweg. This weekend, they drew attention to hiring new mills, as this is minimal at the moment. Minsink: “It’s a beautiful craft that should not be lost.” About twenty visitors gathered in and around the mill on Saturday morning. Pancakes are baked, you can weave wicker baskets and take a factory tour. “In this department we make bread mixtures, pancakes and cakes. Our self-built machinery is powered by grinder blades. We are doing well here,” says Mincink satisfied.