Many animal species are named after tyrants, slave owners, or colonists. Some biologists say it’s time to rename those animals. Critics talk about Awakening Madness.

Macon’s ice bunnies live in the vast grassy plains of the American Great Plains. The gray-brown inconspicuous bird is not much larger than the sparrow. However, the animal has become the subject of heated discussion and naming across the Internet. And all because of his name.

The bird is named after professional soldier John Porter McCown, who collected the first specimens in 1851. McConne was a believable amateur ornithologist, but his biography also contains less engaging pages. He fought as a soldier in the wars against the Native Americans. During the American Civil War, McConne sided with the southern states that fought to maintain slavery. According to many, such a man does not deserve the tribute in ornithology.

This is the view of biologist Robert Driver, affiliated with East Carolina University. In 2018, the driver sent a “name change proposal” to the AOS, the American Ornithological Society. “People of all backgrounds should be able to conduct research in ornithology without feeling ashamed or upset when they hear the name of the bird,” Driver wrote. “I therefore request that the English name of the bird be changed, which is the long name of Macon.”

The US Financial Services Department investigated the case by a panel of nine specialists. Committee members raised a whole host of objections to the proposed name change. Some of their comments: “I see no evidence that John McCown was directly involved in slavery”; “George Washington had slaves, but he did many good things, and I am not in favor of changing the name of Washington, D.C.”; “If we start with this, where will it end?”

The committee eventually decided that McConne’s long name should remain. That seems to settle the matter. But the controversy erupted again after the death of George Floyd and the manifestations of Black Lives Matter. The Washington Post published an article by biologists Gabriel Foley and Jordan Rutter calling for the deletion of all “racist” English bird names, including the Long Spear Macawon. Foley and Rotter write that the name of a bird referring to a person is “a statue with words.” And people like John McCown don’t deserve a statue.

The opinion piece sparked a torrent of negative reactions. Famous evolutionary biologist Jerry Cowen rejected Foley and Rutter’s suggestion as crazy. He noted that our norms and values ​​are constantly changing: “Are we going to change thousands of names again in 150 years, because then we would find eating meat barbaric?” Quinn’s final verdict was stinging: “The work of Foley and Rotter is not going to help us a little bit in the fight against racism. They just want to show how high they are morally.”

However, the AOS seemed sensitive to Foley and Rotter’s arguments. The nine-member panel resumed and has now reached the opposite conclusion: McConne’s name had to be changed in the end. So the AOS gave the bird a new English name: Longspur thick-billed (literally translated: thick-billed ice thrush).

This does not solve all problems. The bird’s scientific name is Rhynchophanes mccownii and thus also refers to John Porter McCown. “Professionals mainly use scientific names, but they’re just ‘statues in words’ like English nouns,” says Berkeley biologist Holly Dormus.

So it seems logical to correct these names as well. But this is not easy, because scientific names can be very persistent. The unfortunate case of Hitler Beetle proves this.

In 1937 the Austrian entomologist Oskar Schieble published a description of a new species of beetle. The blind little beetle was discovered several years ago, in a cave in Slovenia. Scheibel called the animal Anophthalmus Hitleri. He did this to express his “deep admiration for Chancellor Adolf Hitler”.

It is natural for any reasonable person to assume that the name Hitler was dropped after the war and replaced with a more acceptable alternative. But this never happened. The main obstacle is the lack of organization. The rules regarding scientific names are laid out in a kind of code, the International Code of Zoological Nomenclature. The blog consists of more than 120 pages, but there are no laws that allow changing offensive names.

Thus the name Anophthalmus Hitleri continues to exist, with disastrous consequences. The animal became the mascot of the Slovenian fascists. There are pictures of neo-Nazis standing proudly next to a picture of their “beetle” on the Internet. The insect is also collectible. Fans of Nazi memorabilia pay up to 1,500 euros for a proven copy. The demand is so great that the animals are being hunted illegally. A museum repository was broken into to steal specimens.

Anophthalmus Hitleri is also not the only controversial scientific name. The Hypopta mussolinii butterfly got its name in 1927, in honor of the “genius of Italy”, Benito Mussolini. Other animal names honor Emperor Hirohito, King Leopold II, and the conquistador Hernan Cortes.

Should all of these names now be on the bucket? Many biologists, such as Jerry Coen, caution against changing the “politically correct” name. They do not wish to discuss the actions and deeds of a long line of historical figures.

Should the hermit crab be renamed Mesoparapylocheles michaeljacksoni, as the King of Pop has been accused of child abuse? Was George W. Bush – whose beetle is named after him – a war criminal for illegally invading Iraq? What about the hundreds of species named after Charles Darwin? After all, the founder of the theory of evolution made some sexual and racist statements in his books and letters.

It is clear that such discussions will take a very long time. Time that might be best spent studying our declining biodiversity.

On the other hand, it is of course absurd that generic names like Hitler and Mussolini still exist in 2022. It might not be a bad idea to amend the Code so that the most egregious names can be removed. Even Jerry Quinn seems to have won this. On his blog he wrote: “Of course there are some people who should not be honored. If there was still an Adolf Hitler High School in Germany, then of course I would not be against the name change. 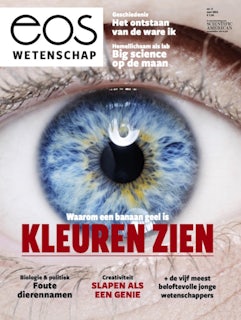 In this issue, we think about our sight: a natural walk for the blind and visually impaired in Kalmthoutse Heide, the limitations of our color perception and the nearly transparent butterflies.