Tessa Beetsma and Imme van Es are teammates of Jong Oranje and HDM. As if that wasn’t enough, they also share a room during their stay in the World Cup city of Potchefstrom in South Africa. The day before the quarter-finals (Friday, 11.15 a.m. against South Africa) we put it on The duo from The Hague – working on their last duels at Young Orange – six proposals about the present, the past and the future.

I still can’t believe the tournament actually went on
Van Ess: I totally agree. go first last minute No trough. Then continue. Then you hear that you do not participate as the Netherlands. And then we all came out as a team.
Bitsma: We started talking with the guild. With the intention of continuing to participate. Because that bothered us. We have been in contact with all the top league coaches to form an agreement and find a solution.
Van S: “You don’t have, yes you can have it. So we thought. Tessa and I played this ourselves in the background.”
Bitsma: Haha, as usual, eh?
Fan S: “Finally it worked. One Saturday in February we had an online meeting. I wasn’t on the call because I was training at HDM Girls A1. But yip [Dicke] He stood close to me and kept me informed. That was special. But the mystery remained until we got on the plane last week.
Bitsma: “Because corona, that was also something else.”

Fear of corona has played a major role in my life in recent months
Bitsma: Absolutely. Towards December – when the tournament was first due to take place – it was still a real problem popping up across the Netherlands. That has changed in recent months. Recently the rules have become less strict.
Van S: “Everyone can forgo those rules, but we had to keep our tight commitment. A positive test at the wrong time could mean you didn’t show up.
Bitsma: ‘If you walked into Albert Hein with a face mask on, he would look at you weirdly. As if you had corona at that moment. Sometimes it was hard to see that the world around you had more freedom. But yes, we did everything for the World Cup.
Van S: ‘A week before the tournament, it was announced that we don’t have to take a PCR test to enter South Africa. However, we then decided to stick with the rules. As a result, we rarely saw anyone in the last days before departure. It’s better to be very careful than to drift a bit.

I’d rather be in the shadows than in the spotlight
Bitsma: Haha, you’re with the right people with that phrase. None of us are very prominent. We don’t need that or anything else.
Van S: “It depends on how familiar I feel in a particular environment. I’m more introverted off the field than on the field. I also want to be a leader there, I train and I want to have possession. But I understand that role can be less obvious. This Not necessary for me either.
Bitsma: “We are less interested in everything that happens around the game of hockey. Share a little bit of our life on Instagram. We love the game and the team, This is† This shelter suits us.

Sometimes it’s hard to combine my studies with hockey
Bitsma: It’s completely different for both of us. At the end of August I completed my studies in Commercial Economics, Sports Marketing and Management. I got it all at once and that was fine with hockey. But this season, also because of the World Cup, I took a gap year. The run up to the tournament was very intense. I had a part time job to make ends meet. It was a perfect choice for me, because I had almost nothing on my mind but hockey. Next year I may want to do a master’s degree at HBO. But which one exactly, that’s a later concern.
Van Es: I study, just like Teuntje [de Wit] Mechanical engineering. They weren’t that flexible during my studies, but in the end I passed a minor. Exams went well, which helped. I prefer to do it all at once. Sometimes it doesn’t fit.
Bitsma: “If you train and train A1 girls, study and also participate in hockey completely for three days …”
Van S: “I hear sometimes that I have to push myself a little less. But what do I say no? All of these things give me energy, too. 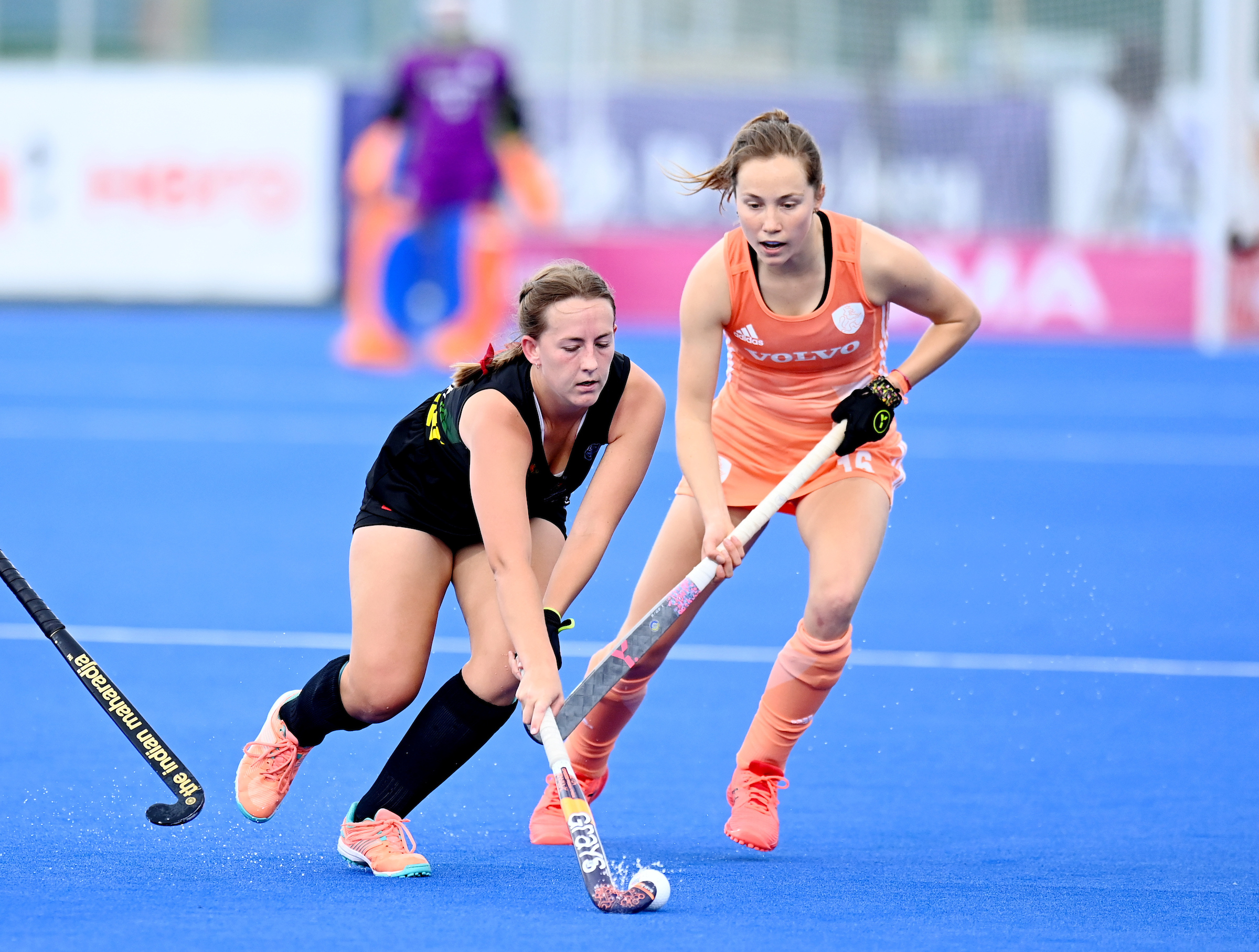 This is not my last tournament in Orange
Bitsma: “Oh my God…”
Van S: “This is where our humility comes into play. But we both know what we think…”
Bitsma: “This is our last tournament with the Young Dutch, and after that we got older. We both have ambitions to continue after this.
Van S: “But so to speak…having ambitions and expressing them is another thing. We don’t want to be arrogant. But it’s true that we do.”
Bitsma: We want to continue to grow at the club. We also have room for that.
Van S: “We haven’t been young for a few years now. Gaining more responsibilities on the field. As a result, we’re taking steps in the right direction. But dude. That’s a very difficult proposition.

I’m just here to get gold
Bitsma. ‘Among other things. Our goal here is definitely gold. But we also want to create something. Show what the Netherlands is.
Van S: So you’re talking about looks. Our way of playing. You won’t beat us†
Bitsma: “If it comes out hopefully it will lead to gold.”
Van S: “We really want it, but we don’t really think ‘we’re going to come and pick up the gold.’ We shouldn’t overestimate ourselves, it doesn’t help us.
Bitsma: We try not to put too much pressure on her. But she is very lively on the set. For many players, the tournament won’t work if we don’t get the gold. That’s how it is.